For the past 2 years Fera has been working with NASC to co-design and make operational the first molecular seed diagnostics testing laboratory for Nigeria, ensuring that NASC can provide a better seed certification service to the seed industry. It was therefore with significant pleasure that Fera’s Julian Smith was invited to attend the laboratories official opening by the Honourable Minister of Agriculture and Rural Development, Chief Audu Ogbeh. The opening, that also included a Seed Fair, was well attended by the private sector, government departments, donors, and overseas embassies.

In opening the laboratory, the Honourable Minister applauded the ambition of NASC to secure good quality certified seed for Nigerian farmers’, and to serve the wider region of west Africa. The importance of seed certification was also observed in preventing the entry and spread of major seed-borne diseases such as Cassava Brown Streak Disease and Maize Lethal Necrosis that, if introduced to western Africa, stand to devastate its agriculture. 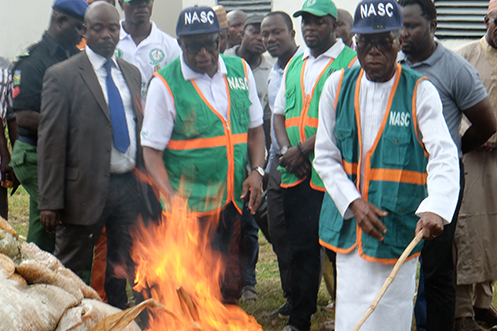 Julian described the development of the laboratory as a critical pillar of BASICS, a project funded by the Bill and Melinda Gates Foundation that sets out to develop a ‘economically sustainable seed system for cassava in Nigeria’, but more importantly a pillar for the Nigerian seed industry and farming sector to prosper. Identifying BASICS as amongst the first major donor-project for NASC, Julian highlighted the outstanding leadership at NASC for its commitment to the project, whilst recognising that much work remained to be done reaching far beyond the investment and cassava focus of BASICS.

The NASC Director, Dr Ojo Olusegun, noted how the molecular facility started from a very basic room, requiring a complete refit from the plastering, floor, ceiling and electrics, adding doors and windows. It was from this point that Fera specialist in pest and disease diagnostics undertook the design of the laboratory and the selection of technology and equipment, focused on what would be most robust, flexible in application to other crops and diseases, affordable and easy to implement. Smart by design, the facility can serve a multitude of seed tests for cassava, tomato, maize, Irish potato, yams, sweet potato etc.

The first application of the NASC molecular testing capability will be deployed through BASICS in testing cassava ‘Breeders’ seed’ produced by the National Root Crops Research Institute and the International Tropical Research Institute for Cassava Mosaic Disease (CMD) viruses. By virtue of BASICS, Breeders’ seed of cassava will, for the first time, be required to meet a new seed certification standard that includes a molecular test for CMD viruses. The CMD diagnostics have been developed in partnership between NRCRI and Fera, and NRCRI will play a vital part in supporting the application of this technology at NASC.

NASC are on record for requesting that all organisation, commercial and non-commercial and especially apex organisations, that multiply seed must be registered as seed producers and comply to certification. As is the example of other countries, it is only when this happens, that the investment of BASICS and the Molecular Laboratory will be valued and the services of Government, such as seed certification and plant quarantine, as expected by farmers met.