Under BASICS , the National Agricultural Seeds Council (NASC) has successfully undertaken the first Breeders’ Seed assessment of Cassava Mosaic Disease (CMD) virus presence and prevalence, collecting leaf samples from the field and undertaking the laboratory analysis at the NASC Molecular Seed Testing Laboratory; thus paving the way for the adoption of the first Breeders Seed Standard for Cassava in Nigeria. The Molecular Seed Testing Laboratory had been official opened back in October by the Honourable Minister of Agricultural and Rural Development Chief Adudu Ogbeh .

Fera’s Jenny Cole and Julian Smith were privileged to spend a day with the Oyo regional NASC inspectors (Michael Adeseko and colleagues) and IITA staff (Najimi Adetoro and colleagues), in inspecting IITA’s cassava breeders’ seed. Their task was to work through the practice of a proposed new Cassava Breeders’ Seed Inspection Standard that included the collection of 300 leaves and the testing of these leaves for Cassava Mosaic Disease (CMD) viruses at the NASC Molecular Seed Testing Laboratory at Sheda. The workshop, or desk-perceived, plan was for the NASC inspectors to randomly select 12 quadrants of 25 cassava plants (5 x 5) within a single field and to take a leaf from each plant, to give 300 leaves per field. Then to fully randomise these 300 leaves, before taking 12 sub-sample of 25 leaves and using a small (5ml) plastic tube to core a leaf discs from each of the 12 sub-samples. These numbers had previously been considered by Fera’s Roy Macarthur as providing a good level of statistical rigour and quantification for CMD virus prevalence at 1%, 5% and 10%. Once collected, the samples were to be transported to the NASC Molecular Seed Testing Laboratory at Sheda for CMD virus testing.

In what was said to be the hottest days of the year, it was quickly realised that ‘walking a cassava field’ as you might a rice, wheat or potato field, is not an easy reality. By 5-6th months' the cassava canopy is closed and above your head, by the 10th month the stand is lodging, making for an impenetrable forest. In taking on the wealth of knowledge with NASC and IITA, it was agreed that a reasonable expectation was to undertake the inspection from fields aged less than 8 months and before lodging. At this age it was a difficult, but doable, proposition to push your way through the cassava stand to define a quadrant of 25 plants and take a leaf sample, whilst also recording normal inspection parameters of pests and diseases and off-types. In working as two in a team, they duly set out to collect 300 leaves off 300 plants, taken from 12 randomly selected quadrants per field; and to then to collect the cored leaf disc into the 5ml tubes for transporting to NASC. Moving between 3 field they gathered confidence that inspection and leaf-sampling can go hand-in-hand; but learnt more preparation was needed with regards to the leaf coring, such as providing a stool and low table. Overall, the consensus was that leaf sampling could be a practice fitted easily within a Breeders Certification Standard.

From the field activity, fellow Fera colleagues were met, Lynn Laurenson and Hollie Pufal, and at NASC, Sheda, the Fera team worked diligently with NASC staff Rebecca Tolulope, Femi Olisa and Hassan Ismaila to undertake the first true-test of the NASC Molecular Seed Testing Laboratory. Over the course of the next 4-5 days the NASC staff, through a mix of being mentored and then leading, successfully tested the 300 leaves of the 3 fields. And they were pleased to record zero levels of Cassava Mosaic Disease viruses in the 3 Breeders fields.

Find out more about the international work we do across the globe. 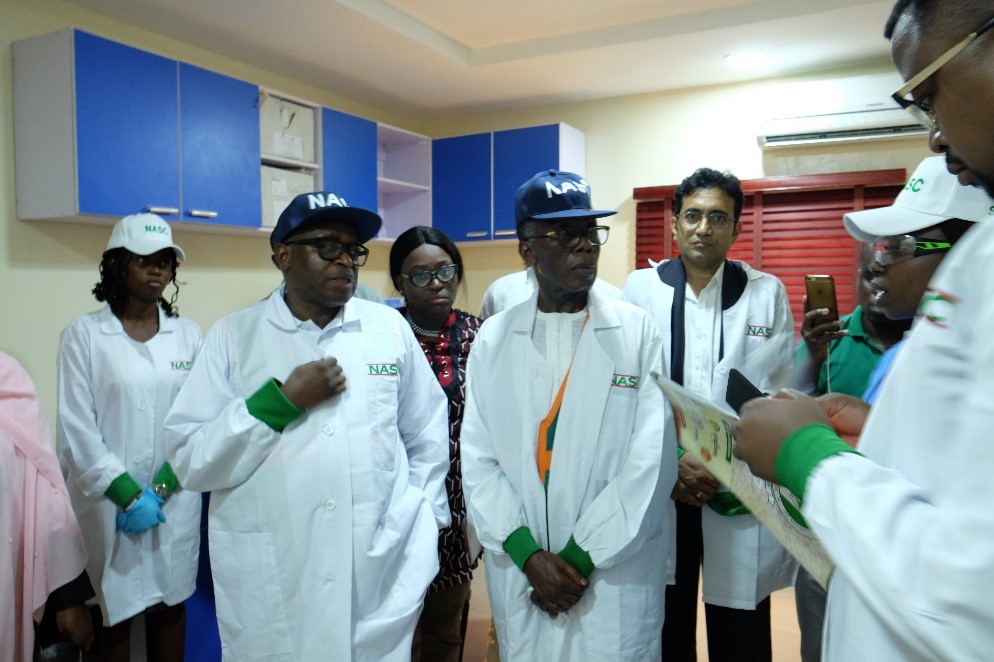 The success of these events was suitable marked by the NASC Director General, Dr Ojo Olusegun, hosting a well-received evening meal for the Fera staff, now suitably dressed in national attire in celebration of a major goal of BASICS duly accomplished.

If you would like more information on the international work we do, or to arrange a visit and tour of our site, please email us.